When I think of women who are rockin’ it in one area of their lives while it’s pretty rocky in at least one other, I think of Morgan, Jaymie, and Alonna.

These three — former clients and friends of mine (although not their real names) — did what most of us do and spent a lot of time feeling like a fraud and beating up on themselves for not having their shit together.

But then these three (each in her own way) did something quite unusual and interesting that helped to elevate (in remarkable ways) that area of her life she was struggling through.

Allow me to walk you through what these three did — and undid — so you can do your own version. 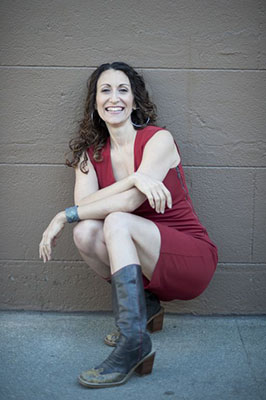 Morgan grew up with a mother who told her nearly everyday that she was a waste of space and should have been born a boy.  (And those were the easy days when her mother wasn’t throwing things and screaming).  Most statistics and psychologists would predict that Morgan would have passed that kind of parenting onto her own child, especially as a single mom.  But she didn’t.  She tells me how proud she is — and even calls it her life’s work — that her son is confident in who he is and knows he is completely lovable, capable, and delightful.

(And yet, Morgan couldn’t seem to get her mother’s mean voices out of her own head, and felt cut off at the knees by her own self-criticism and self-shaming).

Jaymie grew her health coaching practice from the ground up, in record time, even while pregnant and then nursing her first child.  She used her focus, organization, and drive to routinely earn more money than her husband and loved seeing so much health and radiance bloom in her clients.

(And yet, Jaymie was secretly worried her marriage wouldn’t last.  She resisted sexual intimacy with her husband and could feel the space between them widening).

Alonna was in and out of doctor’s offices during her early 20s, trying to heal her acne, low energy, and 60 pounds of extra weight.  She spent years doing her own research and experimentation, getting to understand her body, and working with alternative practitioners and is one of the most spunky, self-assured women I know.  Her symptoms are gone for good, and in its place is a deep reverence and respect for her body.

(And yet, Alonna routinely got bounced check notices from her bank and was piling on credit card debt, not really sure where her decent income was going each month).

Each of these three women were rockin’ it in one area, rocky in another.

Each of these three women realized that there was an innate genius at work within her that was allowing her to rock it.

Each of these three women began to get curious about how to apply her genius — her Feminine Genius — to that other area of her life that was tanking.

Every one of us, regardless of gender, has Feminine Genius within us — a mix of our intuitive, feeling, receptive, sensual, collaborative strengths.

But we live in a world that is over-obsessed with Masculine Genius — our rational, thinking, goal-oriented, will-powered, competitive strengths — and we often either don’t even notice that we have Feminine Genius strengths.  Or we don’t consider them strengths, but rather major liabilities.

Feminine Genius asks you to trust your intuition before your reasoning, and your body before your mind.  To experience pleasure before productivity.  To feel before you think.  And to receive before you give — especially overgive.

Feminine Genius asks you to see yourself the way your soul — and probably most people — see you: completely lovable, worthy, and delightful.

Feminine Genius asks you (and Morgan, Jaymie, and Alonna) to:

What woman doesn’t feel the pressure to have it all be happy-happy, joy-joy all the time?  But the first break each of these three women gave herself was permission to not be hitting home runs in all areas of her life.

Sure, “having it all” is a great feeling and it’s a great gig when you’ve got it, but the ideal of having all your ducks in a row at all times is so weighty it can drown a gal.  Shake it off.

2.   Appreciate what you HAVE.

It took Morgan some time for her to see all that she HAD done, shifted, achieved, and healed; what WAS working and where there WAS success with her relationship with her son.

She really tried to brush it off and underplay it because it felt overshadowed by all the other areas of her life that were rocky.  But eventually she began to get what a big deal it was that she was able to rewrite the story of crappy parenting that she had been given, and to feel truly proud of the relationship with her son that she had created.

3.   How fully are you using your genius?

In the area that’s NOT working, how fully are you able to trust your intuition before your reasoning, and your body before your mind?

Can you hear your intuitive, inner knowing?  If you CAN hear it, how often do you follow what you hear, or do you go instead with your “mental” voices of worry, doubt, fear?

When it came to money, Alonna realized she was tuning into her “mental” voices, and that those voices actually came straight from her father’s mouth.  He would often say to her, as a young girl who wandered into his office and wondered over what he was working on, “You don’t need to look at that.  That’s not for you.  That will be your husband’s job.”

No surprise she was literally afraid to look at her bank and credit card statements.

Alonna was already very in touch with her body’s signals and her intuition, especially through all the physical healing she’d done.  When it came to money, however, she just wasn’t tuning in.

She heeded the gentle intuitive nudge to look — and to have a girlfriend there with her as she did, not only to make it more enjoyable but also pick up the pieces in case anything exploded or caught fire.

After those first few looks, and emboldened because nothing actually exploded, Alonna moved on from simply balancing her checkbook to do things like growing her company from one assistant to 20 team members, and even raising a round of angel investing for significant expansion.

Alonna applied the Feminine Genius strengths of intuition before reason and feeling before thinking to the once-rocky area of her life, her finances.  “Nothing was actually wrong with me and money,” Alonna says, “I just wasn’t listening to my body.”

In the area that’s NOT working, how do you see yourself and treat yourself?

Do you see yourself as a hopeless mess or as lovable, worthy, and delightful? Are you kind to yourself or are you your own worst critic?

Morgan saw her own child as 100% lovable, worthy, and delightful and Feminine Genius asked her to turn that attitude on herself.  Perhaps some of the hardest and most rewarding work we can do in a lifetime, Morgan learned to cultivate a sense of friendship with herself, to see herself and speak to herself the way she’s naturally seen (and spoken to) her son, and the way she wished she had been seen (and spoken to) by her own mother.

There’s nothing like this kind of attitude adjustment to help you land quite comfortably in your skin, which is now something Morgan is enjoying getting better and better at — able to enjoy herself simply as she is, for perhaps the first time in her life.

In the area that’s NOT working, how easily can you enjoy yourself now, even if your to-do list is still long?

Or are you like Jaymie was, putting off pleasure for later and postponing joy until you have worked hard enough (and long enough) to “deserve” it?

Jaymie took on the Feminine Genius strengths of pleasure before productivity and receiving before giving.  She stopped her “punishing” workouts and only did exercise that made her feel good in her body.  She scheduled in time in her workday where she would do whatever spontaneously appealed to her in that moment, a way to give to herself instead of always giving to everyone else.  She stopped seeing her husband’s bids for intimacy as a distraction from her work, but instead as a form of nourishment for them both.

Her business didn’t suffer; she made the same amount of income while stressing less.  Ironically, she had more to give her clients, herself, and her husband.  She (and her hubby) now know their marriage will last.  When last I checked, they were having regular spicy date nights in the week and spontaneous spicy “meetings” in the days, had just moved into their dream house close to the ocean, and were expecting baby number two.

Those rocky areas of your life may not transform to “awesome” overnight — or all at the same time — but please enjoy these guidelines to rocking your Feminine Genius all the while.

Put in an appearance at the discussion and share with us at least one area of your life that you are rocking, and one that’s rocky.

To you, enjoying being you,

PS:  Check out this Facebook Live video from last week, “When success is a mirage,” which looks into what three things ACTUALLY have us feel successful.