You know that part of you that you detest?

Your laziness, your muffin top, your frizzy hair? Your neediness, your insatiable hunger? That you lie to your husband, to your children, to yourself?

You know how you’ve longed for a scalpel to cut that part out? Or a pill to take it away? Or a mantra, or yoga pose, or 40-day cleanse to help you rise above it once and for all?

What if there was another way to be with the parts of you that you want to cut into pieces and feed to the dogs?

I call that “other way,” Feminine Genius. Today I thought I’d share with you a bit about how it hunted me down, burrowed into my heart, and decided to stay forever. 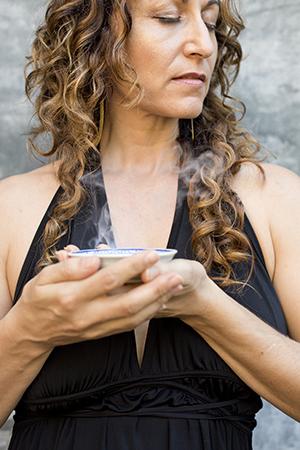 I was in my kitchen on a sunny Sunday morning about six years ago. I had woken up miserable like I had for many mornings, and stood staring at the kettle as it was busy boiling water for me.

But as I examined my misery in my mind — trying to understand why I was so angry, so sad, so depleted, and how to fix it — a miracle came in through the window.

Instead of picking up my inner scalpel, and before I could get to work slicing at my shortcomings, I stopped.

What I now know as Feminine Genius (sometimes known as grace) grabbed my wrist and held it steady before I could strike at myself. And whispered something that changed everything.

“What if there was wisdom in this part of you? What if this anger, this sadness, this depletion, is actually wise rather than shameful? What might that wisdom be?”

My scalpel arm twitched, but was still.

I listened. I let it in. I followed Her line of reasoning to its natural conclusion.

I turned toward these parts, rather than away.
(And a deep and ancient part of me unclenched).

I brought my curiosity, instead of my scalpel.
(And instead of wanting to excise my flaws, I felt the natural urge to kneel and carefully dry their tears).

I wondered, what IS wise about anger, sadness, depletion?
(Oh, anger wants me to see that something I value deeply about myself, feels threatened — and that “something” is the personal truth I’ve been too afraid to share for fear of rocking the boat).

(Oh, and anger loves me enough to flood me with fire so I can never again un-see that my personal truth is precious enough to burn for).

(Oh, and it’s sad when we don’t value these parts of ourselves. It’s depleting).

I considered, might anyone else on the planet feel this or fear this, too?
(Chances are, I realized, nearly everyone. So, it turns out these despicable parts of me connect me more to my fellow humans than isolate me from them).

I thought, what is love FOR, if it’s not for the dark and frightening parts of ourselves just as much as for the pretties and lovelies?
(Oh, right.)

I imagine this is the line of reasoning that led Mother Teresa to tend to the lepers. That helped Nelson Mandela come out of 25 years in prison with his humanity, vision, and dignity intact.

This is Feminine Genius.

An indigenous people of the Amazon say that humanity is like a bird with two wings, one masculine and one feminine. Obviously, both the masculine and the feminine wings are needed for the bird to fly and be whole.

They also say that for far too long, the masculine wing has been pumping strongly and is over-developed from overuse. And that the feminine wing is almost atrophied from underuse.

Now, while I do love and respect our masculine wing — the strengths every one of us has (regardless of gender) to think, logic, reason, judge, fix, compete, and go for the goal — we as women and we as a culture are stuck in a painful rut of personal misery and cultural angst because we have for too long been trying to work, love, and live using primarily our masculine wing. It’s killing us.

Know where we got that obsessive lust for the scalpel, pill, or magic mantra? From our masculine wing in overdrive, that’s where.

Our masculine wing can get a little nuts, and when it sees a flaw it pounces. It tries to hide it, pick it apart, perfect it, bypass it, surpass it, or get a little cosmetic surgery to fix it.

Feminine Genius is all those strengths we think of as NOT strengths.

Our feelings. Our changeable moods, energy levels, and productivity. Our intuitive nudges that make us seem nuts. Our desires, our hungers, and our longings to connect, to be seen, and to be celebrated.

I know I talk a lot about Feminine Genius, this atrophied wing of humanity. (As you might know, I even wrote a book titled Feminine Genius last year). It would seem I have a lot to say about about bringing our feminine wing out of retirement, fattening her up and getting her all shiny and strong.

It’s become a strange quest of mine, over the last decade, to be a champion for the underdog not only out there in the world — the single mom who rages at her kids, the teenager who’s stopped eating, the toddler who is terrified by her reckless parents, the man who’s just revealed his affairs to his wife — but also for the underdog inside each of us.

The underdog part of us that lies. That takes things that do not belong to us. That hides, that hates, the has smelly underarms and breath. The part of us that is black with rage. That grieves even when the world says we should be over it by now. That lusts. That does stupid shit, even though we kinda knew better while we were doing it. That loves to point out our flaws, rub our noses in our mistakes, and give ourselves a vicious whipping.

One of my new-to-me favorite poets, Nayirrah Waheed writes in her book, Salt:

the thing you are most
afraid to write.

So, I promise I will keep doing this, and to bring you with me.

To write the things I’m most afraid to write, and to keep sharing with you what Feminine Genius will do to you if you let her still your scalpel-crazy hand, make a nest in your heart, and stay forever.