What does the Ugly Duckling, Elsa from “Frozen,” or any ol’ underdog have to do with what’s in your underwear?

Read on, my friend, read on. I have so much to tell you about underdogs, underwear, and why I love my quirky body. Period. 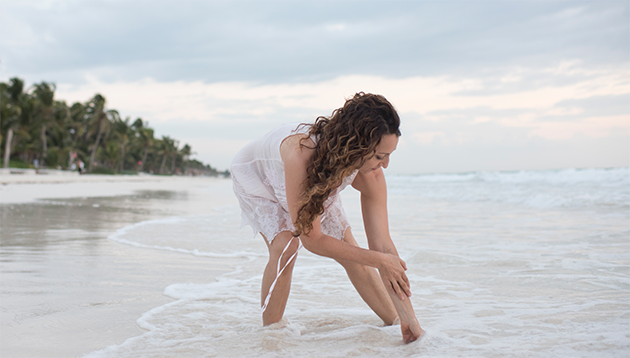 (And, a little warning that I also discuss potentially-upsetting things about eating disorders and menstruation).

If you haven’t met her yet, the Ugly Duckling is a storybook little bird, paddling after a group of other birds she assumes are her family. Almost everyone calls her ugly because she doesn’t look or quack like the group of birds she runs with. Turns out she’s not a duck at all, tho, she’s a swan. Turns out she’s not ugly after all, tho, she’s truly beauty and elegance incarnate — when she is viewed as the wondrous creature she is rather than as “other.”

If you’re not a parent and don’t yet know all the words to “Let It Go,” then meet Elsa, a Pixar cartoon movie princess turned reluctant queen, who has great magical powers to turn anything into ice and snow, powers she is told are dangerous and must be kept hidden. But when she learns how to WITH with her powers instead of trying to hide them, she stops hurting herself and her family and finally feels free and powerful, settling easily into her queenly swagger.

These two underdogs turned super-heroines are cultural phenomenons — massive explosions of movies, memes, books, action figures, backpacks, and stickers. We LOVE their stories of how they crawled out of their misery and found their magic and their place in life.

Why? Because we each in our own way feel ugly and other, that we must keep ourselves hidden.

Maybe it’s due to our poverty, skin color, religion, or being born female in a world that doesn’t particularly value girls, women, or feminine strengths. So when we hear stories like these, something deep inside us leaps up and says, “me, too!”

When I was 17, I ate so little and danced so much that my period stopped. I was bony, bruised easily, and was tired a lot. Then I started to grow short downy hairs all over my body, a sign that hospitalization was imminent.

This was obviously dangerous for my body, starting a chain reaction of health issues (which I’m digging myself out of now, 20 years later) of hormonal imbalance, inability to clear stress chemicals and adrenaline from my system, fatigue, hypoglycemia, digestive issues, and low metabolism. I didn’t know any of this at the time, but honestly I wouldn’t have much cared. I was overjoyed to have no period and be sickly thin, because I was erasing evidence of being so weirdly female, which I saw as ugly and dangerous and other.

You don’t have to be menstruating, or even be able to menstruate, to feel there is something wrong with you as a woman.

For example, scientific studies routinely avoid using female animal subjects because it is believed in the medical and scientific communities that the female hormonal cycle will skew the results.

(Skew the results! For WHOM? Don’t females make up just over HALF of the population of the world?)

This egregious bias means that women are routinely given drugs, protocols, and advice based on frighteningly limited information of how that drug, protocol, or advice will interact with the delicate hormonal system and body of a woman.

All the while I was trying to hide my femaleness under my bony frame, I wished for some magic potion that would shapeshift me into an elegant swan with a striking brand of beauty, into a charmed princess with superpowers and swagger.

Well, guess what? I got my wish. We women ARE magic-makers, super-powered beauties, striking geniuses.

We’ve been taught that because our bodies ebb and flow — because we bleed and have energy levels that go up and down — we are at best disadvantaged and at worst, cursed.

But actually, our ebbs and flows — of our wombs, emotions, moods, thoughts, focus, and productivity — aren’t a curse, they are actually the cure.

We live in a world that thinks we should hustle, grind, and be ON all the time. Which makes us sick, trashes our self-confidence, and dulls our love for our work.

We’ve forgotten (or don’t want to admit) that it’s healthy and powerful to ebb and flow, not just go-go-go.

Tigers, for example, aren’t confused about this. They rest when they are tired and then they get up and run like the wind.

Wombs, for example, are very clear about this. If they want to help create actual babies — or metaphoric babies like paintings, books, and businesses — they know they’ve GOT to ebb and flow.

Whatever our gender, whatever shape our body, our ebbs and flows connect us to the natural creative cycles of the world. To the cosmic intelligence that spins stars and grows tulips. To intuitive intelligence and gut instincts — our ancient and innate knowing of when to sprint and dance and sow, and when to stop and listen and reap.

Our ebbs and flows are super-powers, not super-curses. After a lifetime of feeling “other,” they welcome us back to the family of the magical and the swagger-full.

Have you ever said, “I just got three times as much done in a three hours as I usually do in three days?”

In contrast, if have you ever said, “It just took me a three hours to do something that should have taken me three minutes!” it is probably because you were in the “Ebb” phase of your “Ebb-and-Flow” cycle, so your energy was more inward, low, and diffuse. But you probably expected yourself to be in “Flow,” because you like the world assume you are supposed to be ON all the time. Meaning, you got so little done and felt like you were spinning your wheels because you were working AGAINST your Ebb-and-Flow cycle.

It’s been 16 years now that I’ve been working WITH my Ebb-and-Flow Cycle and it’s still hard sometimes. I still have the voice of the dominant culture whispering in my ear telling me, “If you ebb-and-flow and don’t just go-go-go you’ll lose your place in line. People are waiting for you and relying on you. You can rest when you’re retired. You can sleep when you’re dead. You’re only as valuable as you are productive.”

I hear the same voices you hear. But it IS possible to turn the volume down on them. We can step away from the laptop when our energy ebbs and nothing will catch on fire. And then, when it’s go-time again, we can run like tigresses.

There’s no real road-map for this. In some ways, we are the first generation to be doing this: to be so able to bring our creativity and work into the world, and do it in a way that honors the Feminine Genius Ebb-and-Flow Cycle.

And, we are doing it. We are in this together, throwing stuff at the wall and seeing what sticks. We are innovating, trying, refining.

Come to the discussion and share with us something about you that you used to assume was “ugly” or “other” that you now see as just fine or even swagger-worthy.

With love to the wonderful body you are in,