I was in lower Manhattan a couple weeks ago, and saw something unbelievable.

I was in town on a whim, meeting some friends for lunch at a spot that happened to be a few blocks away from where I lived during my 12 year tenure in NYC as a professional dancer.

How many times in 12 years did I come up to that same street from that same subway platform to be greeted by a huge billboard, usually filled with some high fashion image from Prada or similar that made me feel like crap?

But this time as I looked up I saw something remarkable. 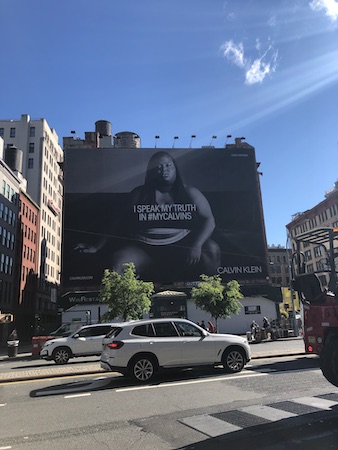 But this? A black woman. Who isn’t smiling pretty for the camera. Whose body is ample. Whose stance is unapologetic. Whose isn’t posing sexy for the omnipotent male gaze. On a 25 foot high billboard in one of the biggest, most glamorous cities in the world.

I’ve been collecting phenomena like this billboard, and I can’t wait to share them with you (below) — extraordinary women, ordinarily tossed to the margins because of their body size, ability, skin color, sexuality, and age.

These women own it. They are powerful. They are defiant. Angry. Hilarious. Joyful. Inspiring. Smart AF. As my friend Briana puts it, “they strut standing still.”

The thing is, if we always see starving docile white girls in magazines and movies, we learn that is what we need to become. But if instead we see womankind in her full range, we learn that we too can become our full range.

We have to look kind of hard to find art and entertainment and media that leaves us better than it found us. But here’s a start.

First up is Luisa Omielan.
She’s a stand-up comedian, a Brit. This is a 10-minute, must-watch YouTube segment, “Getting Called Old and Fat When You Fly as F.”

I think I peed a little. After I high-fived and cheered at my computer screen. She’s got two other full-length shows that are fab too, “What Would Beyonce Do?” and “Am I Right, Ladies?” All about depression, self worth, fighting for your career, being deserving of love, and loving your love handles. Binge watch now.

Next is Maysoon Zayid.
She’s also a comedian, as well as an actor, writer, and co-founder of the New York Arab-American Comedy Festival. A Palestinian Muslim gal from New Jersey. With Cerebral Palsy. And class, sass, and a rapier wit.

She will knock your socks off in her TED Women talk, “I got 99 problems … and palsy is just one of them.”

“Juice” is a great song/video to start with, if you’re yet to know and love Lizzo. Because to know Lizzo is to love Lizzo. And when you love Lizzo it is damn near impossible not to love YOU.

Beyonce.
As my friend Jolene says, “If you want to create real change, amass as much power as you can.” As Beyonce says in her song, Formation: “I might just be a black Bill Gates in the making.” Yaaaasssss.

In my eyes, Beyonce is a true artist and a true activist, amassing an impressive amount of power. I see her helping to rewrite the future for black people — for black women — for which I’m grateful and in awe. And also, for any of us who look at pop culture and only see what we AREN’T, Beyonce shows us what we CAN BE.

Any Beyonce song will do, but some of my favs are Freedom (feat. Kendrick Lamar), performed live at the BET Awards and her remix of Crazy In Love.

Nadia Bolz-Weber in da house (of god).
Watch out, faith just got frisky. An author of four books, former stand-up comic, recovering alcoholic, and Lutheran pastor, this woman takes her Christianity into corners of life where the church is traditionally uncomfortable going.

Check out “This Pastor Is Melting Purity Rings Into A Golden Vagina Sculpture” where she shares what the words “repentance, “satan,” and “apocalypse” actually mean. Or her interview with Terry Gross on Fresh Air, “A Lutheran Minister Preaches a Gospel of Love to Junkies, Drag queens and Outsiders.”

Advanced Style.
A fresh and fabulous documentary following women over 50 (most in their 70s and 80s) who are gracing the streets of Manhattan with their style, self-love, and vitality. Says one, “I never wanted to look young, I want to look great!”

I suggest watching the entire film (it’s on Hulu) or at least check out the official trailer. Just imagine what the inside of your mind would be like if these were the women peeking out at you from the pages of magazines and the heights of billboards!

PYNK.
This song by American singer, songwriter, rapper, actor, and producer, Janelle Monae, is all about loving lady parts. This is pop music, my friends! I fell out of my chair when I first watched the official video, a snappy, sensuous, visual feast.

It’s a marvel — the video AND the pynk part. Your lady parts will start clapping.

OK, your turn.
Who from above totally did it for you? And who else should be on this list? I know there’s not a lot of folks from the LGBTQ community in my little short list above, so help me out. Come on down and share with us.

Because … “We cannot be what we cannot see.” (Marie C. Wilson said it, I believe).

I cannot wait to see what you will be,